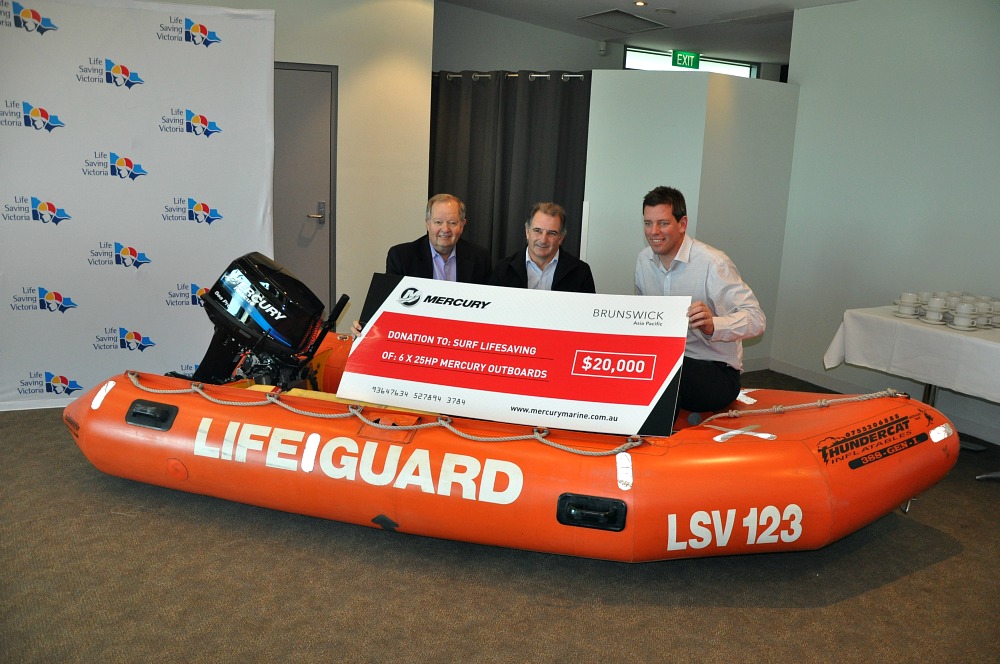 The engines will be widely distributed to maximise their benefit – one 25hp engine to each Australian state and a 30hp engine to New Zealand.

Volunteer surf lifesavers and lifeguards perform more than 10,000 rescues each year in Australia and New Zealand, with at least 1,000 conducted in IRBs.

“I’m very proud to hand over these powerful and reliable engines on behalf of the Mercury team at Dandenong in Victoria,” Mr Schwabero said.

“Surf lifesavers do an amazing job and today we’re ‘putting up our hand’ to show our support and make a practical, real life difference to the Surf Life Saving Clubs and volunteers who donate so much of their time and effort to help keep us safe.”

“IRBs are a vital piece of lifesaving equipment – they can be launched quickly and easily, making them a very effective rescue tool. Ongoing maintenance and replacement costs do place a financial burden on our Life Saving Clubs so these engines will definitely make a difference,’’ Mr McLeod said.

“These engines will absolutely help us perform our role and we want to make sure they are put to use to get the best outcomes for the community.”

Mercury Marine is a long-time provider of outboard engines to Surf Life Saving in Australia and New Zealand. Mercury’s engines are incredibly rugged and reliable – exactly what’s needed in a rescue environment.

If an IRB were to roll and the Mercury engine fill with water, it can be drained on the beach and be back up and running in a matter of minutes.

Each year, Brunswick grants its Chairman’s Safety Award to just three “outstanding performers” from its manufacturing, engineering and distribution facilities worldwide. Mercury Marine’s Regional Distribution Centre in Dandenong was announced as one of the three winners earlier this year. A key part of the award is a donation which the winners can pass on to a charity of their choice. The Distribution Centre team chose Surf Life Saving.